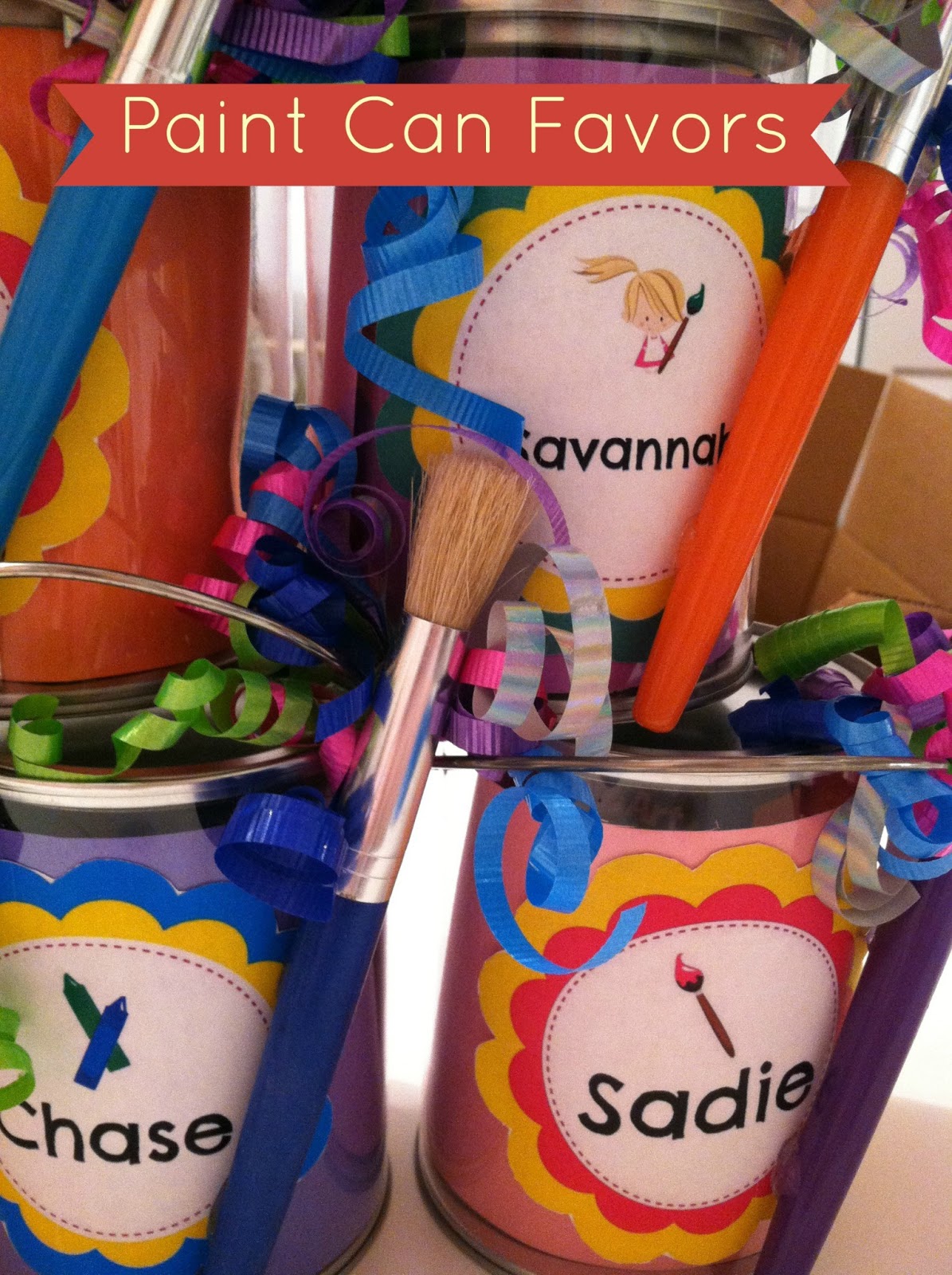 This weekend we had Bean's 5th Birthday party.  (Excuse the sobs.)  Bean decided to have an art party this year.  Okay, okay, I decided we'd do an art party.  I knew Bean would love it and I thought it would be something different than Monkey Cheese's or whatever.

I found a local art studio that offers birthday parties.  Kids can come in and learn to paint a picture on a canvas and then they get to "bedazzle" their work.

Since it was going to be an art party, I wanted the goodie bags to go with the theme.  Some of you long time readers might remember my past rant about goodie bags.  I am learning though that they don't have to be a bag of plastic trinkets or sugarey candies.  I think this year's incarnation is a good example of that.

If you're going to have an art or paint party, what do you think of?  Massive amounts of mess?  Okay, right.  What's the next thing you think of?  Let me just give you the answer, okay?  PAINT CANS.

I found these clear ones at OrientalTrading.com.  They are 5" tall. 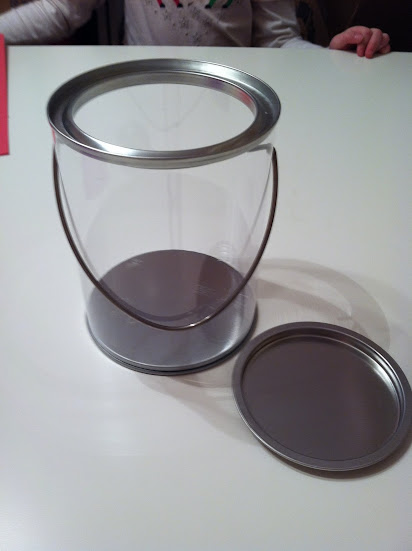 We wanted them to be colorful so we picked several colors of construction paper and cut it to fit inside the can.

(Can you see my little helper in the background?)

After the pieces were cut to size, Bean would roll them up and place them inside the cans. 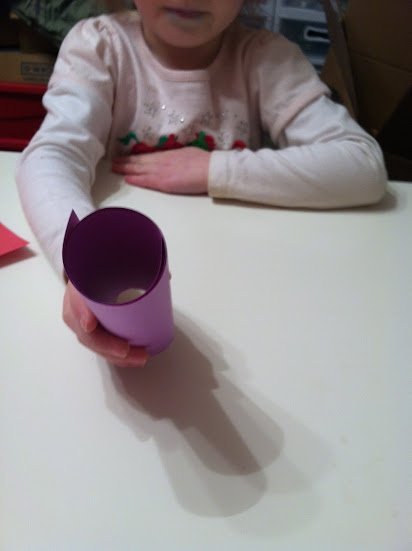 (Do you also see the lasting effects of a green lollipop on her face?  Even helpers need a pick me up, I guess.) 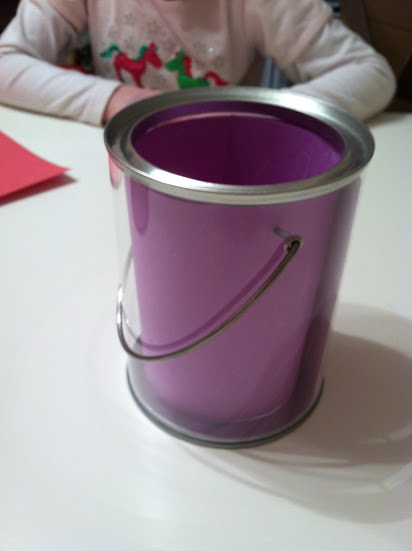 Then it was time to fill the cans with our goodies.  We wanted to give out art supplies so that our friends could have something they can use over and over, at least for a little while.  We looked at several stores and either couldn't find anything we wanted to go along with our theme or the cost was too much.  Finally, Hubz saved the day while at Wal-Mart.  I had been looking at some Crayola products and the cost was over a $1.00 per box.  I love Crayola products and we have plenty of them.  But we were throwing this party on a budget so we had to be careful on the cost of the goodies.  Hubz found some boxes of Rose Art crayons and chalk that were much less than the Crayolas.  I've seen RoseArt around for some time but frankly, I consider Crayola to be the best.  But let's face it, by the time you get these crayons in the hands of a 4 or 5 year old, or by the time they are shoved up someone's nose, or ingested by the dog, does it really matter?  I can tell you from my own personal experience that the doctor will not give you back your crayon after he extracts it from your nose.  Sanitary concerns or some mumbo-jumbo like that.

Once we got everything home though we realized the boxes of chalk were too wide for the cans.  We decided on just putting a few pieces of chalk in the cans instead.  For the girls, Bean also picked out some stickers and a lip gloss ring.  For the boys, we chose Matchbox cars and sticky frogs.  And of course, a goodie bag wouldn't be complete without some kind of candy so everyone also got a few Hershey Kisses.

Once the cans were filled and the tops put on, I cut some ribbon and tied it to the handle and made pretty curls. 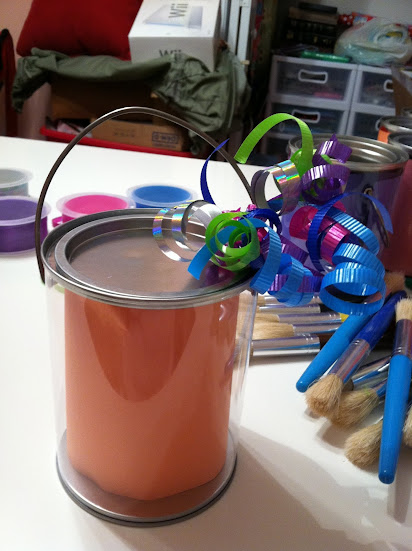 The labels were made using some pre-made scalloped labels found in a kit called Multi-Brights from Lilly Bimble and clip art from Creative Kids by Miss Pickle's through the MyGrafico.com site.  I uploaded the labels to PicMonkey.com and added in the names and clip art.

***Update***  The Creative Kids by Miss Pickle's is no longer on the MyGraffico site but you can purchase the clipart on Miss Pickle's Etsy store.  She now has a Bright version and a Pastel version. 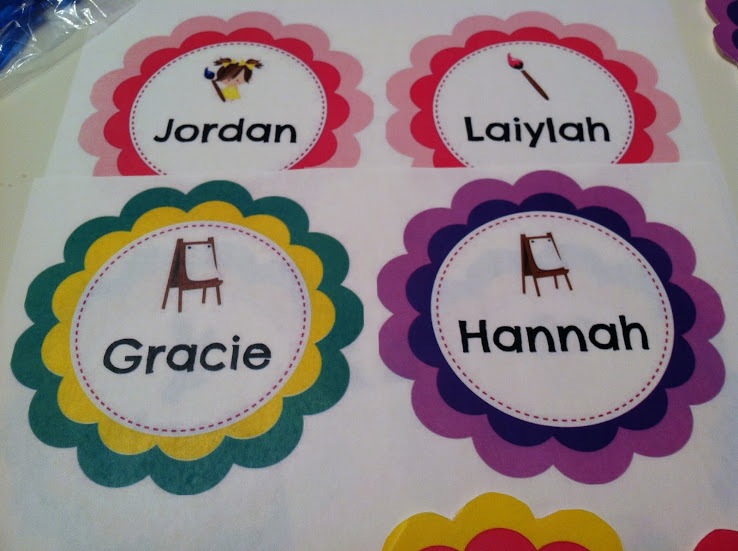 I printed these labels on full sheet mailing labels.  I'm not sure if that's how the professionals do it or if they use actual sticker paper but I will say that using the labels made made taking them off a lot easier.  They did not try to stick to the cans at all.

For the finishing touch, we added a paint brush also found at OrientialTrading.com.  These were stuck on the cans with 3D Glue Dots.  I can't say that those dots are easy to remove later on though so just be prepared for a fight if you ever want to take the little suckers off. 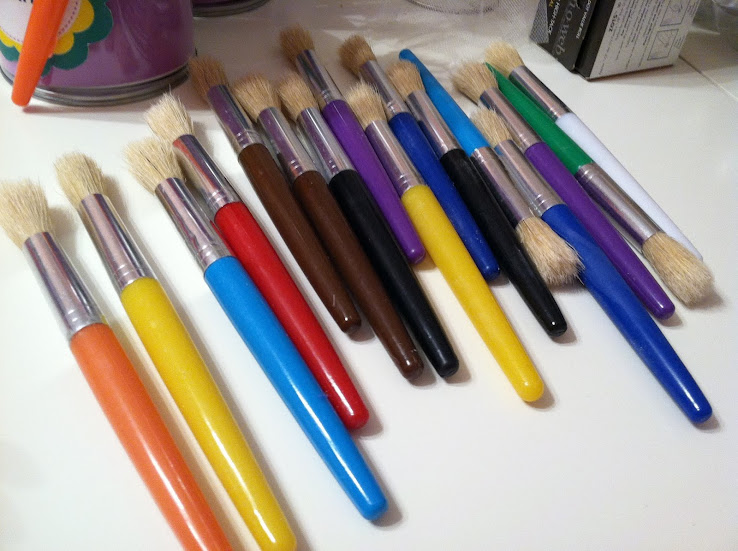 Bean loved them once they were all done.  I loved how colorful they all turned out and they were a big hit at the party.  A couple of moms asked me if the art studio put them together for me.  They were a little surprised to find that we had made them ourselves.  We are available for hire in the future!  Just putting that out there. 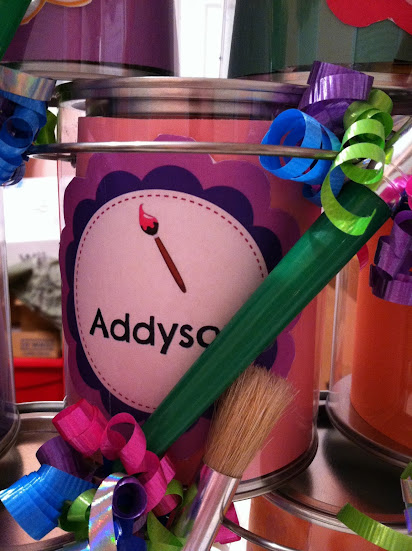 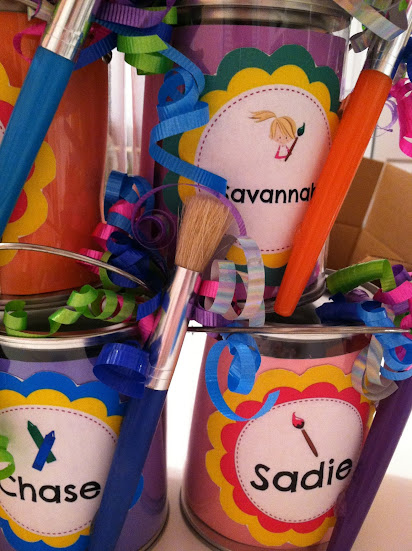 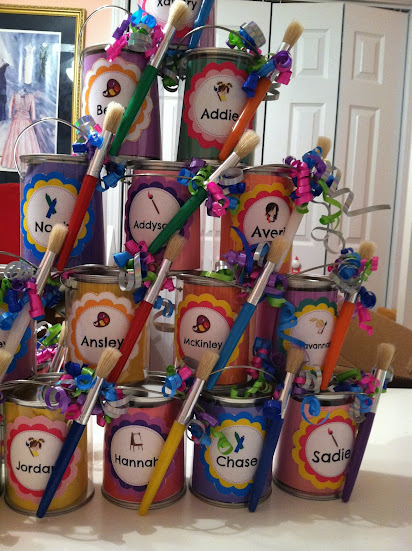 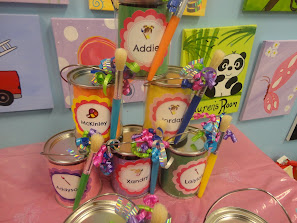 I will be linking to the following linky parties:

Whatever You Want Wednesdays @Free Pretty Things for You

Show Off Your Stuff  @Fireflies and Jellybeans

Hooking Up with HOH @House of Hepworths

A Crafty Soiree @Yesterday on Tuesday

Kitchen Fun with My 3 Sons

Mop it Up Mondays @I Should Be Mopping the Floor

Motivate Me Mondays @Keeping It Simple

Email ThisBlogThis!Share to TwitterShare to FacebookShare to Pinterest
Labels: DIY

These are brilliant - I am so envious!

I am hosting a Party Party at Mums Make Lists for birthday party posts, pins and pics and would really love for you to link up x

GREAT idea!! These are such cute favors!! Hope your kiddo enjoyed a super fun birthday! {I totally understand the sobs...kids grow up way too quickly! I've tried telling mine to stop, but they just won't listen ;)}

These make me want to have an art party. Love it! Just pinned!

It’s a new Linky Party to create more buzz for your blog and connect with others! If you haven’t joined Creative Crafts Thursday yet, please share your projects at www.creativecraftsthursday.blogspot.com each and every week and check out what other creative divas are up to.

April, you're brilliant! Almost makes me wish my kids were little again so I could do this. I said ALMOST. LOL! I'm going to pass this on to some of my friends with grandkids.

I love the idea of an art party! And those paint can goodie favors are absolutely brilliant. Great job!

The clip art is no longer on that website you listed. Any idea if I can still get those clip art pictures?? Thanks!

@Heather I have updated my post with new links to the clipart. Let me know if you have any other questions.